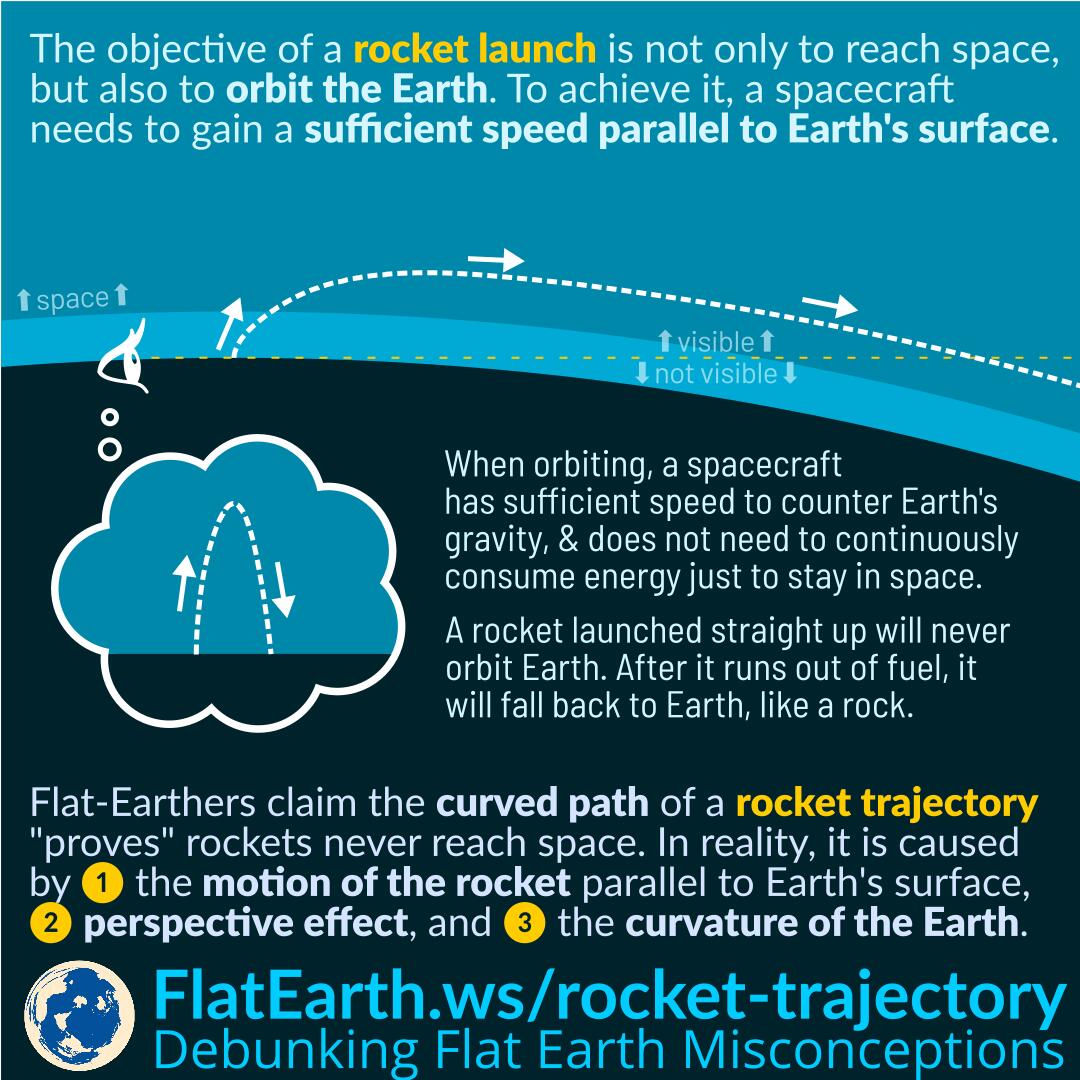 Rocket launches have a curved trajectory because their objective is not only to reach space but also to enter Earth orbit. To achieve it, a spacecraft needs to gain a sufficient horizontal speed, parallel to Earth’s surface.

Flat-Earthers claim the curved appearance of a rocket launch trajectory “proves” rockets never reach space. In reality, it is caused by the motion of the rocket parallel to Earth’s surface, perspective effect, and the curvature of the Earth.

Space is not that far. Above the altitude of 80 km or 100 km can be considered space. Reaching space is the easier part, but the primary objective of a rocket is to enter Earth orbit by having a high enough horizontal speed.

By orbiting the Earth, a spacecraft can shut off its thrusters, and remain up there for a very long time. From a simulation, a 100 kg object with a cross-sectional area of 1 m² placed on a 300 km orbit will fall to the Earth only after 46 days, without using any fuel.

The most efficient way to reach orbit is to initially travel straight up to overcome air resistance, then tilt onto its side and gradually increase this tilt until the rocket is parallel to Earth’s surface.

If the rocket launches straight up, it will reach space faster with less energy. But it will not have the required velocity to orbit. The rocket will have to continuously spend energy only to remain up there. Once it runs out of fuel, the rocket will fall back to the Earth very fast. It’s not rocket science.

From the vantage point of an observer near the launch location, the rocket will eventually appear to go “down.” It is due to the aforementioned horizontal motion of the rocket: the rocket does not go only up, but also away. The perspective effect also contributes to the observation: the rocket is going farther, and as it goes farther, it will appear closer and closer to the horizon. And last but not least, the rocket follows Earth’s surface, which is curved. The rocket will eventually disappear below the horizon, just like a ship traveling away will start disappearing from the bottom first.

Illustrated rocket trajectory is the SpaceX DM-2 mission from LaunchDashboard.space.