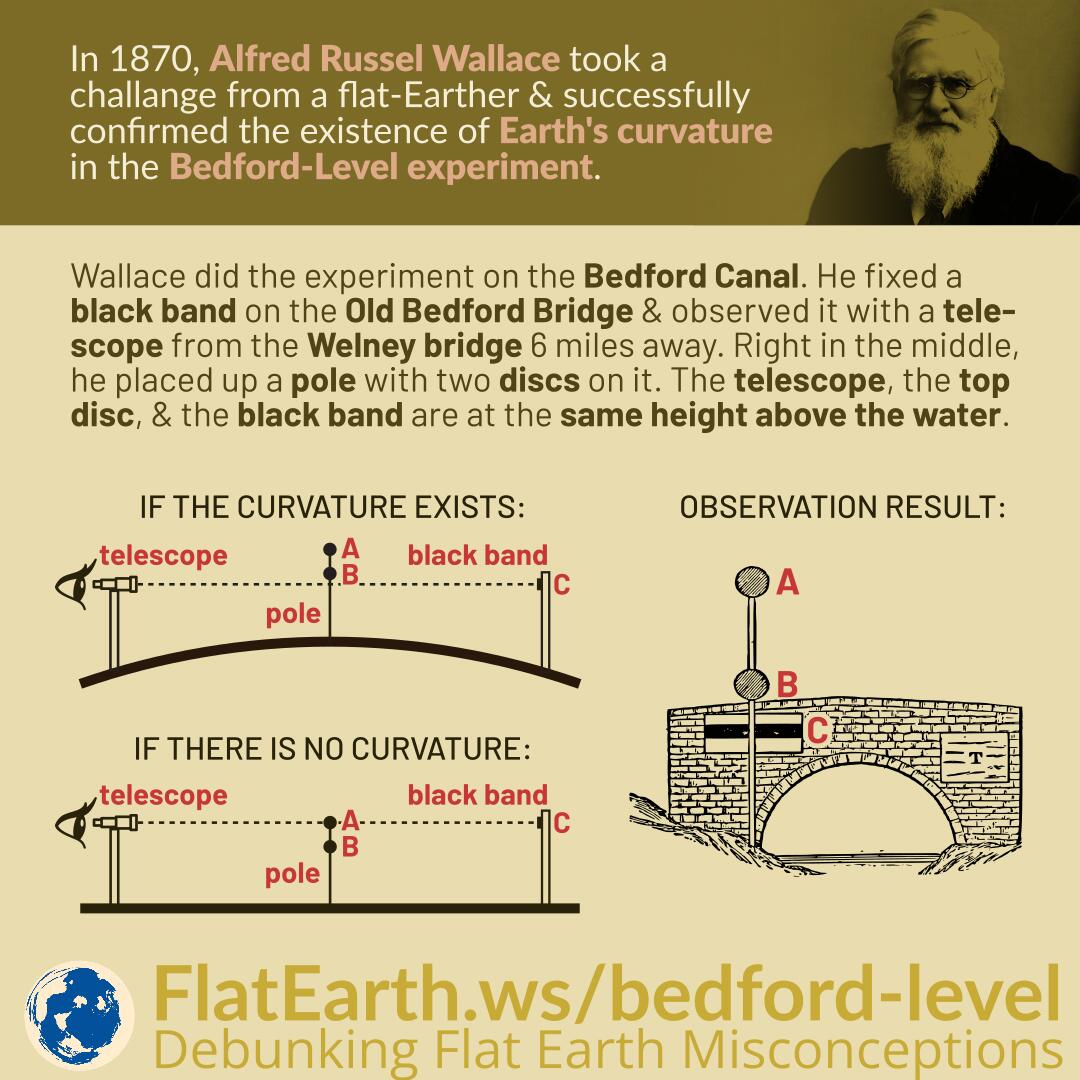 In 1870, Alfred Russell Wallace took a challenge from a flat-Earther and successfully confirmed the existence of Earth’s curvature in the Bedford level experiment.

Wallace did the experiment on the Bedford Canal. Wallace fixed a black band on the Old Bedford Bridge and observed it with a telescope from the Welney Bridge 6 miles away. Right in the middle, he placed a pole with two discs on it. The telescope, the top disc, and the black band are at the same height above the water.

From the telescope, both discs were seen above the black band, proving the existence of Earth’s curvature.

Hampden, the flat-Earther, was a disciple of Rowbotham, who significantly influenced the flat-Earth movement back in the day. Rowbotham had previously used the Bedford Canal to prove the non-existence of Earth’s curvature. He looked through a telescope from one end of the canal and observed boats on the other end.

In the experiment, Wallace successfully proved the existence of Earth’s curvature. Unfortunately, Hampden, like many flat-Earthers, was not honest. He never had the intention to allow Wallace to take the wager. Instead, he made various threats to Wallace and his friends over the years and as a result, was put in jail many times.

On January 12, 1870, John Hampden, a flat-Earther and a disciple of Samuel Rowbotham, wrote in Scientific Opinion magazine and challenged scientists to prove the existence of Earth’s curvature. He offered £500 as a reward for anyone who could prove it.

A cash-strapped Alfred Russel Wallace thought he would earn easy money. He answered the challenge and made the demonstration on the straight and 6-mile long Bedford River (9.7 km).

He is the same Alfred Wallace, a notable biologist and conducted various research in many places in the world.

Wallace, who had experience in surveying, designed his experiment as follows:

The Old Bedford bridge, about six miles off, was of brick and somewhat higher. On this bridge I fixed a large sheet of white calico, six feet long and three feet deep, with a thick black band along the centre, the lower edge of which was the same height from the water as the parapet of Welney bridge; so that the centre of it would be as high as the line of sight of the large six-inch telescope I had brought with me.

At the centre point, about three miles from each bridge, I fixed up a long pole with two red discs on it, the upper one having its centre the same height above the water as the centre of the black band and of the telescope, while the second disc was four feet lower down.

It is evident that if the surface of the water is a perfectly straight line for the six miles, then the three objects—the telescope, the top disc, and the black band—being all exactly the same height above the water, the disc would be seen in the telescope projected upon the black band;

whereas, if the six-mile surface of the water is convexly curved, then the top disc would appear to be decidedly higher than the black band, the amount due to the known size of the earth being five feet eight inches, which amount will be reduced a little by refraction to perhaps about five feet. 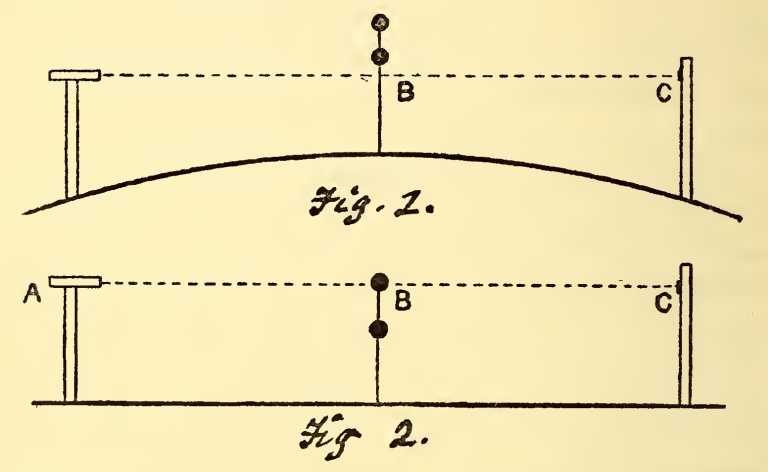 In the illustration above, the top picture is what would happen if the Earth is flat, and the bottom is if the Earth is curved. The experiment was approved by all the involved parties, including Hampden and the referees.

When the experiment was in progress, Wallace was always accompanied by Hampden or the referee, and he made sure the height of all the three objects were the same.

When seen through the telescope, the bridge and the pole in the middle appeared like this: 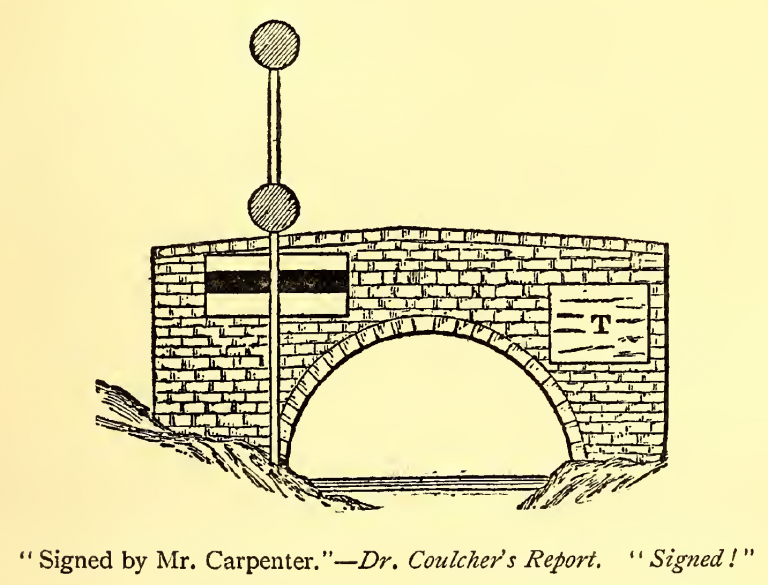 It is clear that both discs were seen above the black band, and Wallace’s hypothesis was correct. Unfortunately, Hampden did not take the result nicely. He argued that the telescope was not flat and did not have cross-hair. It was undoubtedly a made-up excuse and had absolutely no relevance to the experiment.

Wallace did follow his request, though, and borrowed a level and a telescope from his friend. In the second observation, the result, as it should be, appeared the same.

Wallace also did his experiment in the opposite direction. He put a flag on the Welney bridge and moved the telescope to the Old Bedford bridge. The result was also the same: both discs were visible above the flag. 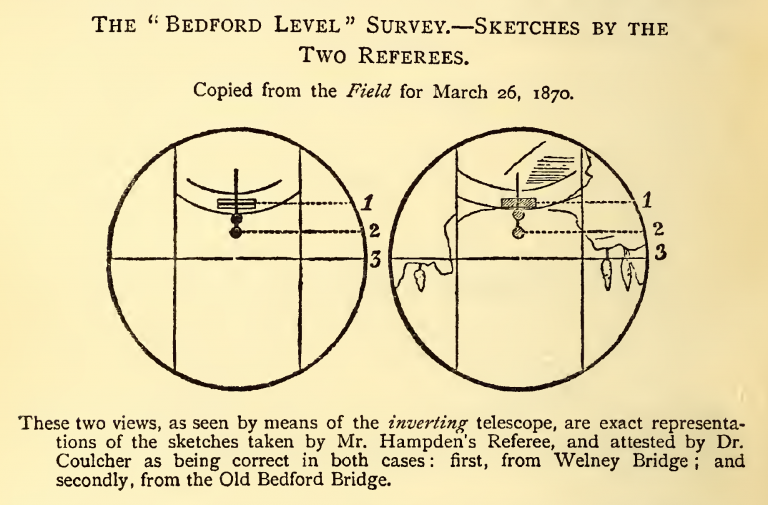 All the observations indicated both of the discs were seen above the black band (and the flag), so it was concluded that the water has curvature, as seen below.

Wallace designed the experiment in a one-sided fashion, giving an advantage to Hampden. He did this by making the second disc below the top disc to ensure Hampden accepted the experiment.

All the referees and the representatives of Hampden agreed that Wallace had won the challenge. But the story did not end here. Hampden demanded Wallace to return his money!

And it was very far from over. Over the next 16 years, Hampden repeatedly threatened Wallace and the people involved in the competition, including one of the referees.

Hampden sent letters to people who knew Wallace and accused Wallace of being a liar. Wallace’s wife also received threats of murder. For this offense, Hampden was imprisoned for three months. But once free, he returned to his behavior again.

After that, Hampden committed various offenses that led him to get involved with the law numerous times:

Wallace thought he would get an easy £500, and the experiment was merely a matter of science. It was far from it; Wallace needed to spend plenty of time and money to deal with the Hampden problem.