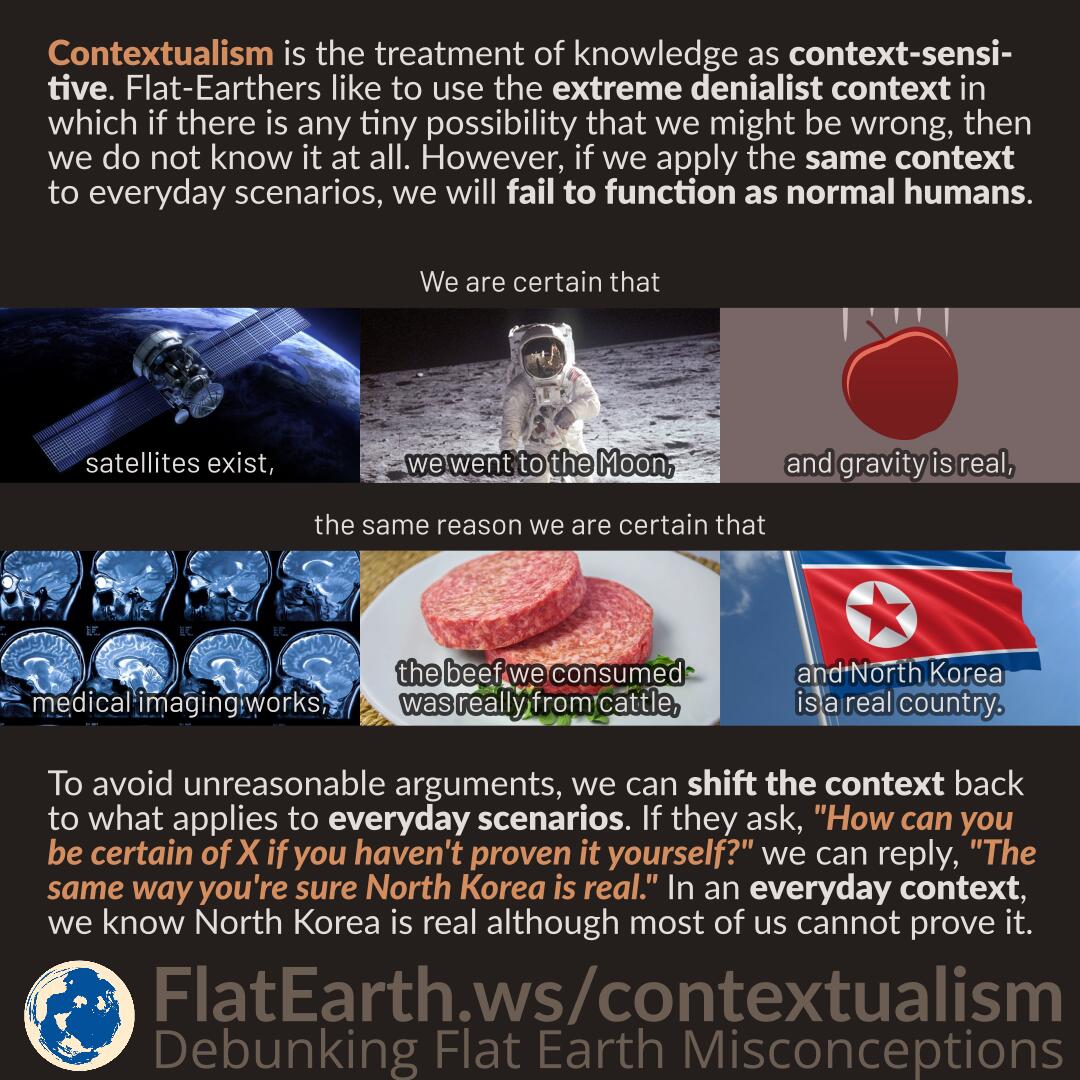 Contextualism is the treatment of knowledge as context-sensitive. In discussions about the shape of Earth, flat-Earthers like to use the extreme denialist context in which if there is any tiny possibility that we might be wrong, then we do not know it at all. But if we apply the same context to everyday scenarios, we will fail to function as normal human beings.

To avoid unreasonable arguments, we can shift the context back to what applies to everyday scenarios. If these people ask, “How can you be certain of <something> if you haven’t proven it yourself?” we can reply, “The same way you are certain that North Korea is real.” In an everyday context, we all know North Korea is real although most of us cannot personally prove it.

They can claim, “You don’t know the Earth is a sphere!” They might be correct, but only in the context where the testimonies of hundreds of astronauts are not accepted, the opinion of too many scientists in the past 20 centuries does not count, all the photos taken from space are assumed fakery, etc.

In the context of everyday human lives, we act differently. In everyday life, humans —flat-Earthers included— reasonably take the opinions and facts from other people without questioning too much. In general, it is correct to rely on these; otherwise, we would not be able to live a normal life.

But in the matter of the shape of the Earth, flat-Earthers would shift the context to the extreme where they would be able to defend flat Earth and ask questions like “Are you certain the Earth is a sphere, and what is your evidence?”

We can certainly answer the question from scientific standpoints and painstakingly refute their arguments one by one, like what we do here. However, we can also let philosophy do the work and shift the context back to where it applies to our everyday lives: “Yes, I’m certain the Earth is a sphere the same way you are certain North Korea is a real country.”

Flat-Earthers will not be able to prove North Korea is a real country with the same level of scrutiny they require from us to prove the Earth is spherical. “All you got are pictures and videos from North Korea and Kim Jong Un. How would you know those aren’t staged?”