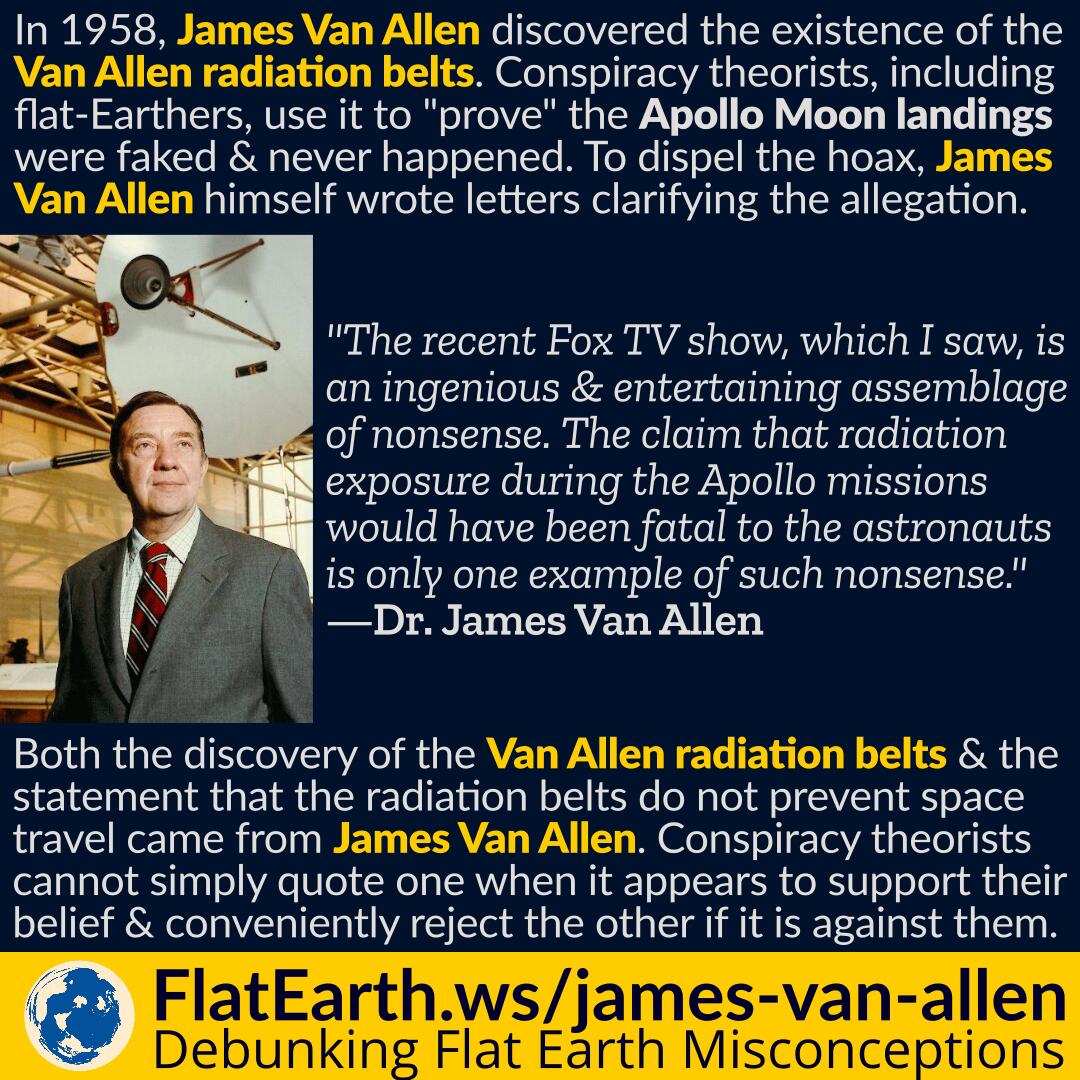 Both the discovery of the Van Allen radiation belts and the statement that the radiation belts do not prevent space travel came from James Van Allen. Conspiracy theorists cannot merely quote one when it appears to support their belief and conveniently reject the other if it is against them.

My question to you, Professor Van Allen, is this. I have read that you have “denounced” the conspiracy theorists’ claims that radiation in the Van Allen belts would have killed the astronauts. I have also seen a quote from you about what utter nonsense the Fox special was. Could you please, if possible, point me to any sources in print or on the web where you have been extensively quoted? If there are none that you know of, and it wouldn’t be too much trouble, I would appreciate it if you could reply with a brief statement on the subject. In all my recent studies about the moon-conspiracy theories, the cornerstone of most arguments appears to be that radiation is what makes interplanetary space travel impossible. I feel that there is no person better qualified to debunk this absurd claim (and no one more likely to be taken seriously) than you. Of course, some conspiracists will say that you are in on the conspiracy yourself, but we can never hope actually to convince them.

In reply to your e-mail, I send you the following copy of a response that I wrote to another inquiry about 2 months ago —

The radiation belts of the Earth do, indeed, pose important constraints on the safety of human space flight.

The very energetic (tens to hundreds of MeV) protons in the inner radiation belt are the most dangerous and most difficult to shield against. Specifically, prolonged flights (i.e., ones of many months’ duration) of humans or other animals in orbits about the Earth must be conducted at altitudes less than about 250 miles in order to avoid significant radiation exposure.

A person in the cabin of a space shuttle in a circular equatorial orbit in the most intense region of the inner radiation belt, at an altitude of about 1000 miles, would be subjected to a fatal dosage of radiation in about one week.

However, the outbound and inbound trajectories of the Apollo spacecraft cut through the outer portions of the inner belt and because of their high speed spent only about 15 minutes in traversing the region and less than 2 hours in traversing the much less penetrating radiation in the outer radiation belt. The resulting radiation exposure for the round trip was less than 1% of a fatal dosage – a very minor risk among the far greater other risks of such flights. I made such estimates in the early 1960s and so informed NASA engineers who were planning the Apollo flights. These estimates are still reliable.

The recent Fox TV show, which I saw, is an ingenious and entertaining assemblage of nonsense. The claim that radiation exposure during the Apollo missions would have been fatal to the astronauts is only one example of such nonsense.

I am an engineer who has assembled a web site http://www.clavius.org that answers the ludicrous claims that the Apollo missions to the moon were hoaxed. As you are well aware, one of those claims states that it is impossible for human astronauts to pass safely through the Van Allen belts, as the Apollo astronauts did. A year ago or so ago, I was handed a copy of a letter you had written to someone else in which you stated, among other things, “The recent Fox TV show, which I saw, is an ingenious and entertaining assemblage of nonsense. The claim that radiation exposure during the Apollo missions would have been fatal to the astronauts is only one example of such nonsense.” I have no reason to doubt my original source, however I regret that I have misplaced my copy of your letter to him. Since that quotation, which I reproduce on my site, has been quoted in turn by others, I am uncomfortable with being unable to substantiate its source with sufficient authority.

A moment of your time to confirm the above quote would alleviate my concern. Clearly anyone familiar with space science can confirm that the Van Allen belts do not pose an impassable impediment to the Apollo missions, but it seems important to my readers that a researcher of your stature has assertively responded to this question.

Thank you for your attention; I have enclosed a self-addressed postage-paid envelope for your convenience.

This is a completely correct quotation from my letter.