This is the analysis for Jeran Campanella’s experiment as featured in the documentary “Behind the Curve”. 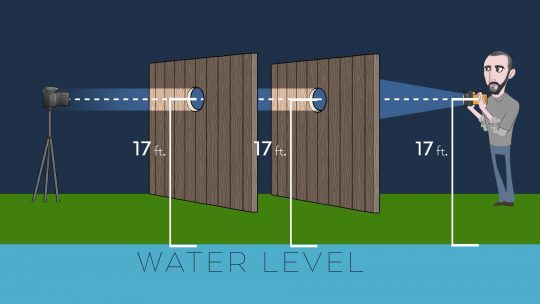 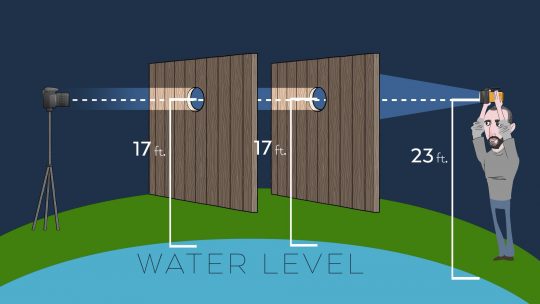 The holes appear to be about 4 inches (10 cm) in diameter.

This is when everything is at 17 ft above water: 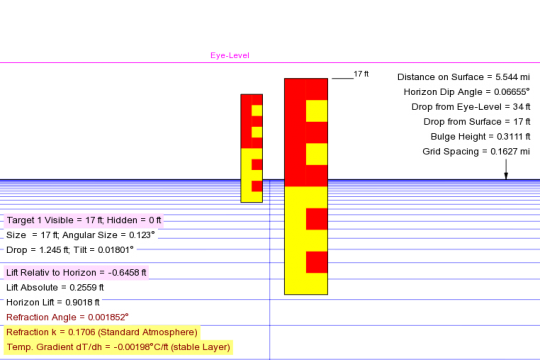 This is when the observer raised to 23 ft, and others kept at 17 ft: 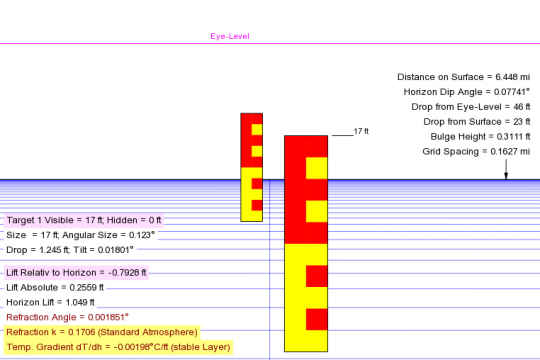 This is after making both objects appear at the same height. The observer here is at 19.6372 ft from the surface. 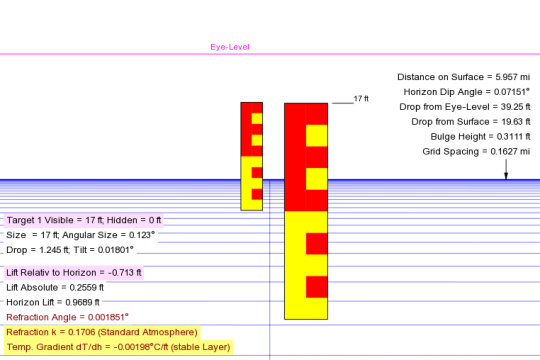 I was the globe-head there. In the video at Globebusters, Jeran shows an illustration with four panels. That may have been the plan, but in the field there were three: one right in front of the laser (which I think is useless), one 1.5 miles down-range with a 6-inch hole 17 feet above the water-line, and one 3 miles down-range, with height-lines drawn on it (I assume; couldn’t see it).

By the time I arrived the sun had set and the panel in front of the laser was up. Enrique got a volunteer, Steven, and they left to set up the down-range panels. I stayed at the laser location, as did Jeran and Daniel the camera-man. (Apologies if I have names wrong or misspelled.)

The laser with beam-expander, and the telescope mount that carried it, did not work. Jeran first adjusted the beam-expander with the beam hitting the ground. When Enrique got the 1.5-mile panel up, Jeran aimed the beam using a remote for the telescope mount. Aiming was touchy: it would fail to move, then move way to much. When he got it aimed, Enrique reported by phone that the beam lit the entire panel. To further adjust the beam-expander, Jeran had to hand-manipulate it, throwing off the aim.

Jeran switched to the back-up plan. At the 1.5-mile panel, Steven held a reasonably powerful flashlight. At the 3-mile distance, Enrique held a monster flashlight. Jeran had a long-zoom camera, 17 feet above water, pointed down-range toward Steven and Enrique. The three set up a conference call, and with Jeran directing repeated the following procedure about ten times:

Steven shined his light toward the camera, through the hole in the 1.5 mile panel 17 feet above the waterline. Enrique held his light at 17 feet above water, which was about waist-high for him, and walked to his left so that its light would go around the middle panel. Jeran and I could see both lights in the camera’s flip-out viewfinder. As well as Jeran could focus, the lights were sizable balls not dots, and they appeared to be at about the same height. Enrique, at 3 miles, would walk back to his right until his light was occluded by the 1.5-mile panel, centered as well as Jeran could estimate. Then Steven would turn off his light and remove it from the hole. The test was then whether we could see, in the viewfinder, Enrique’s light through the hole in 1.5 mile panel, which would support a flat earth. If not, could we see it if he held it over his head, well over 17 feet above waterline, which would support a round earth.

In about 10 tries, with the light held waist-high at 17 feet above water we never clearly saw it through the center panel hole. On one of the attempts, maybe the fourth of ten, we clearly saw it when Enrique lifted it over his head. On that one, Jeran asked him to raise it and lower it a few times, and it would appear when Enrique raised it and vanish when he lowered it. That was the “gasp” moment. Jeran said, “that’s interesting.” I noted it was the prediction for a round earth. When they repeated the whole procedure, it did not happen again. I suggested having Enrique move from side-to-side a bit when occluded by the panel, in case it was lateral alignment that was off. Jeran accepted the suggestion, but it made no observable difference light. D 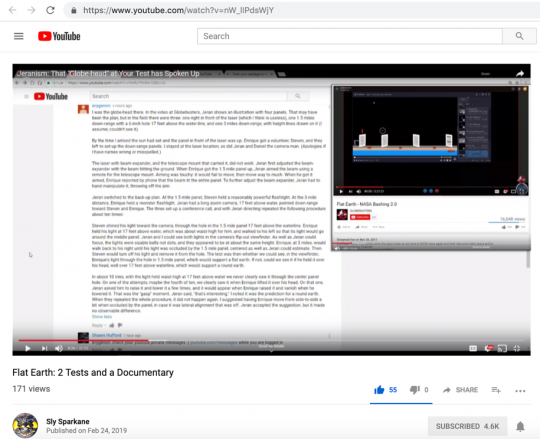