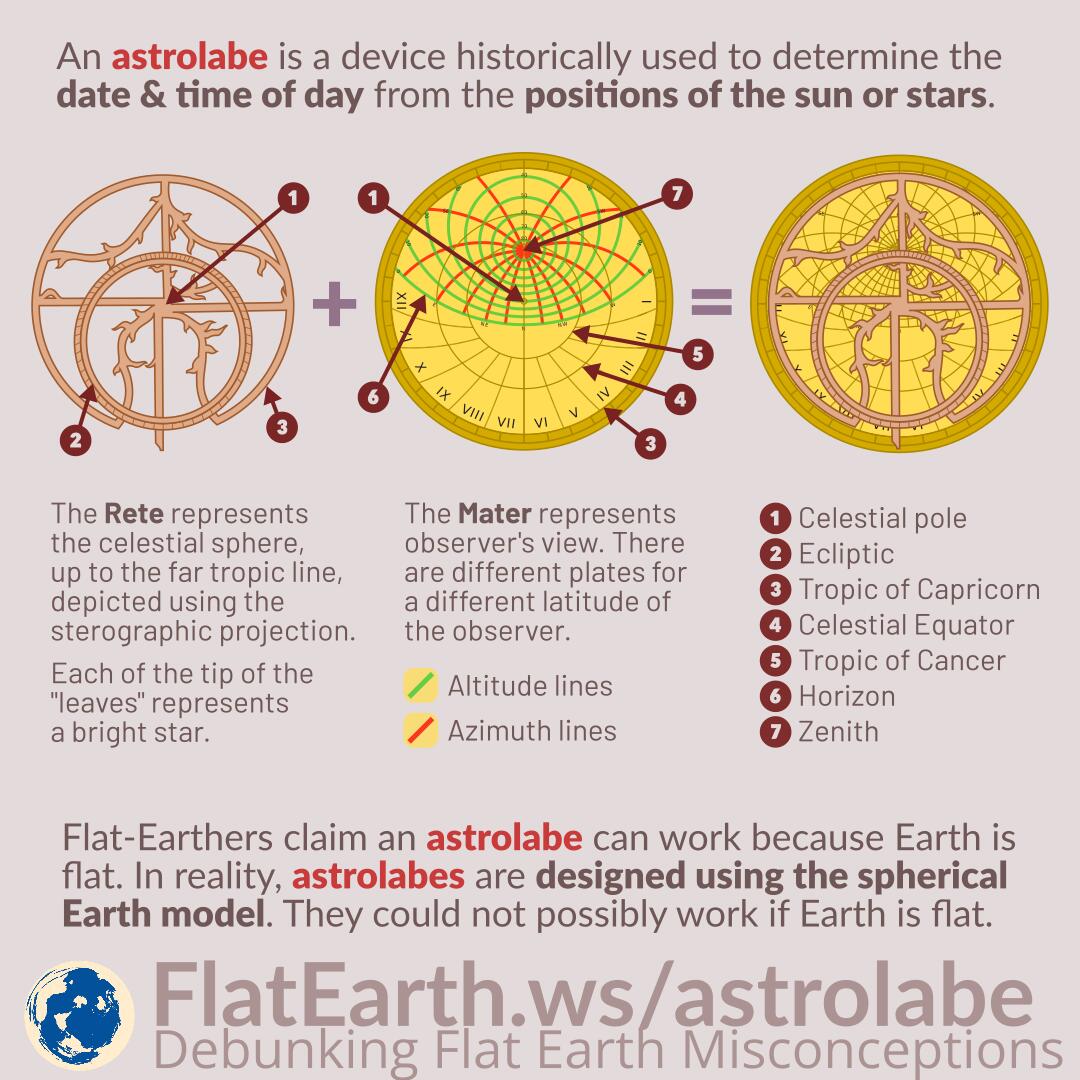 An astrolabe is a device historically used to determine the date and time of day from the positions of the sun or stars. Astrolabe was used from classical antiquity, about the 2nd century BC,  until the age of discovery. It was superseded by the more accurate sextant, star charts, and time-keeping devices.

Flat-Earthers claim an astrolabe can work because Earth is flat. In reality, astrolabes are designed using the spherical Earth model. They could not possibly work if Earth is flat.

The rete is a basic star chart, centered on the north celestial pole, representing the celestial sphere usually up to the tropic of Capricorn.  A southern version of the rete is needed to use an astrolabe south of the equator. Stars in the rete are laid out using the stereographic projection, which preserves the shape of the constellations but distorts their sizes. Constellations closer to the edge are comparatively larger than those near the celestial pole.

The mater represents the sky as seen from the observer. It marks the boundary in which stars depicted in the rete are visible. Because Earth is spherical, there are different plates for different observer latitudes. Most astrolabes describe the celestial sphere up to the far tropic parallel. As a result, the mater cannot show the entire view the observer sees unless the observer is north of the Arctic circle (or south of the Antarctic Circle for southern astrolabes).

In the flat Earth state of affairs, the rete is analogous to the azimuthal equidistant map, that flat-Earthers mistakenly regard as ‘the flat-Earth map’. The mater is analogous to the day & night boundary in the azimuthal equidistant map. In both cases, objects closer to the edge are distorted more. However, with astrolabes, the distortion can be easily seen by merely looking at the sky. In a northern astrolabe, constellations toward the north appear smaller than those toward the south.

Astrolabes are designed using the spherical Earth model in mind, and they would not be usable if the Earth were flat. A good understanding of spherical Earth is required to use an astrolabe.

Follow these step by step instructions to simulate the movement of an astrolabe using Stellarium. This instruction is written for Stellarium 0.18.2 under Linux. Other versions might have minor differences.

Stellarium should now show how an Astrolabe looks. Use Ctrl-Mouse drag to travel through time, and see the movement of an astrolabe.

At the time this article was written, Stellarium cannot display the tropic of Capricorn/Cancer lines. We can enable “Equatorial grid (of date) to get an approximation of the positions of both parallels (they are at +23.5° and -23.5°). Like the equator line, the tropic parallels can belong to either the mater or the rete. Most northern hemisphere astrolabes were designed to show stars up to the tropic of Capricorn.